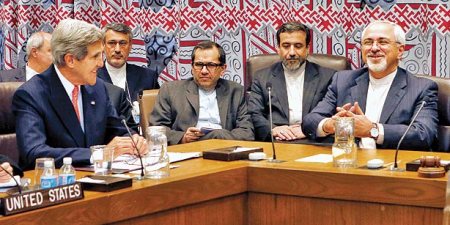 The recent high-drama nuclear negotiations in Geneva were riveting, to be sure. Old foes shuttled between conference rooms, chatted amiably in corridors, colluded to guard the sensitive details of their discussions from an eager global media.

Every utterance from officials, every smile, grimace and gesture made its way onto the twitter feeds of foreign policy wonks and commentators, mostly frustrated by the lack of substance to report.

When a deal did not materialize between Iran and the P5+1, off went the pundits to dig up further minutiae. Who scuttled the agreement? What were the terms of the agreement on the table? Why are the Saudis, Israelis, Congress and the French being such spoilsports?

For any dedicated critic of western policies in the Middle East, this last bit was just mind-boggling. For a change, nobody was blaming the Iranians for anything much. Instead, an atypical set of people and parties were being held accountable as “spoilers.”

Really, in that moment, the world turned a fraction faster. Brought us into the future, it did.

Because here’s the actual deal: deal or no deal at the negotiating table in Geneva, we have entered a new era in the Middle East. Iran is the center of all things important to all the parties that count. Today, nothing of consequence can be done in any of the major military and political theaters in the region without the cooperation of the Islamic Republic.

Syria, Iraq, Lebanon, Israel-Palestine, the Persian Gulf, Afghanistan, Pakistan, Yemen, Bahrain… If Washington is keen to exit from its myriad Mideast entanglements without leaving behind more chaos, it will need an able local intermediary with the clout to promote stability. None of its allies can do this job – not its economically distressed western partners, not a war-wary NATO, not an isolated Israel, not a sectarian Saudi Arabia, not a politically diminished Turkey, and not an Egypt in turmoil.

Deal or no deal, phase 1 in Geneva was already a success. It set the scene for what-comes-next quite effectively. Whether you noticed it or not, your view of good-guys and bad-guys in the Middle East changed in a Swiss conference room. Your perceptions shifted while you were cheering on a historical agreement with Iran, while you watched world-class foreign ministers sweep into town in deference to the importance of this moment, while you rolled your eyes at Israeli Prime Minister Benjamin Netanyahu’s protestations and suspected France of trading “peace” for Saudi cash.

And nobody corrected you much on this perception shift in the days to follow.

No Deal in Geneva

On the sidelines of the Iran nuclear negotiations early this month, the talk was already about Syria and other regional matters. These weren’t distractions – they are the real goals of this Geneva made-for-television showcase.

Washington and Tehran – the two main poles in this 30+ year standoff – have already figured out that they will both have to put enough on the table to satisfy each other’s most difficult constituencies and walk away with a few victories.

If there are spoilers – and there are plenty out there with interest in undermining a historic rapprochement – a deal may not get done, but a new set of understandings will nevertheless exist between the US and Iran that will allow them to move ahead and tackle regional dangers critical to both.

Iran can live with sanctions for a while longer. International tolerance for unilateral sanctions has plateaued anyway, with courts turning back some, and Iran’s trading partners finding innovative ways to bypass others. If there’s no Geneva deal, the US Department of Treasury can also soft-peddle its responses to sanctions violations at the will of the White House – even if Congress remains belligerent.

Washington can live with Iran’s nuclear program for a while longer too. The Geneva talks spawned a measure of public confidence in Iranian goodwill – and Iran seized this momentum by striking further agreements with the IAEA on nuclear transparencies.

The US and Iran have bigger fish to fry. Deal or no deal, the attention has shifted to new arenas.

As hesitant as the US has been over direct military engagement in Syria for the duration of that country’s 32-month conflict, it played the “strike” card in September – and lost.

Washington blinked because it couldn’t predict the “outcome” of military strikes. The only option left after that escalation was an “exit” which was quickly pursued with the Russian-brokered proposal to eliminate Syria’s chemical weapons arsenal.

But in the works was a much more important strategic shift in regional priorities and alliances:

Despite a decade-long “war on terror,” there has never been a greater threat of extremism than in the Middle East today. Arab uprisings produced power vacuums that were rapidly filled by aggressively competing interests – and increasingly, by the kinds of Islamist militants who thrive in chaos.

There are jihadists in every state touched by uprisings, and they are crossing borders to destabilize neighbors with impunity. While a certain amount of “controlled instability” has always been a favored western lever to keep client states and adversaries in check, the regional landscape has suddenly moved into an “uncontrolled” and highly unpredictable zone.

And the US’s traditional regional partners are in no position to help reverse that trend. Israel views itself as a beneficiary of Arab instability – it believes that conflict will weaken and divide its neighbors, leaving Arabs unable to challenge Israel’s political and economic hegemony in the region.

Saudi Arabia is a primary financier and promoter of the Salafist extremist groups and networks engaged in terror and destabilization activities. The Saudis have aggressively sought to militarize various conflicts in the region to roll back revolts against friendly regimes and unseat unfriendly ones. And they are pursuing these policies with a single-mindedness that Washington has been unable to impact or reverse.

To the US’s endless frustration, the Israelis and Saudis have also sought to draw Washington into fronting their Mideast agendas at a time when Americans are keen to exit the region and focus on matters closer to home.

But who in the region shares these new Washington priorities? Which country in the Mideast is willing and able to take on militant jihadists, to promote stability, to provide a security blanket in the strategic Levant and Persian Gulf areas?

Bordering Iraq, Afghanistan, Pakistan, Turkey and the Gulf states, Iran straddles the danger zone and extends its influence into Syria and Lebanon, two other hot spots. Arguably one of the more advanced and stable democracies in the region, many US analysts point to the Iranian leadership as pragmatic, opportunistic, rational and shrewd in their political calculations. In the past two years, Iran has also come under the protective umbrella of Russia, China and other BRICS states, the former two states also proactively concerned about the rise in influence and presence of Salafi terror networks in their own regions.

Together with its newest regional ally Iraq, Iran is set to become the Mideast’s main energy hub, which is already of paramount strategic interest to countries emerging as the next-generation global economic powerhouses.

Hostilities aside, Washington and Tehran have cooperated in Afghanistan and even in Iraq when interests occasionally converged. The US is also intimately familiar with the disasterous consequences of going up against the Islamic Republic in those arenas. But today, Iran can help the US exit landlocked-Afghanistan by its 2014 year-end target date – and can play a role in maintaining stability on borders and in pockets within the country. In Iraq, where the Islamic Republic wields significant influence, Iran can be an able partner in defusing sectarian tensions, tackling political violence and mediating disputes.

The Iranians are also capable of brokering political solutions inside Syria and Lebanon, leveraging Turkish clout when “Sunni” solutions are required, thwarting the rogue behaviors of an increasingly belligerent Saudi Arabia, checking Qatari delusions of grandeur, mediating with and for the Kurds, de-escalating the battle in Yemen, guaranteeing the security of the Persian Gulf, and wielding a necessary “stick” to deter’s Israel’s regional aggressions.

In short, there is simply no other Mideast state as well positioned as Iran to troubleshoot, mediate, cajole and push its neighbors into action – to lead the way, as it were.

And Washington is out of “useful” allies right now. Like it or not, its primary regional adversary Iran is its only solution to a wide range of problems.

Not out of the woods yet

Last week, Hezbollah Secretary-General Hassan Nasrallah warned that the region could head to war if a US-Iran deal is not struck. If that sounds too dramatic, think again. The Mideast is a tinderbox at this moment – any constellation of events could set off a conflagration in multiple countries, and there are parties now gunning for this outcome.

We had a taste of this in Beirut on Tuesday – on the eve of Iran nuclear talks in Geneva – when a massive suicide bombing attack outside the Iranian embassy threatened to raise the temperature in the Levant/Persian Gulf yet again.

The US is uncomfortably aware that its closest regional allies Israel and Saudi Arabia would like nothing better than a last-ditch war to try to turn the tide back in their favor. Both nations eagerly pushed Washington to the brink in Syria two months ago.

The fact is that even if phase 1 of the Geneva deal goes through, there’s a good six months in which spoilers can try to sabotage a final agreement on Iran’s nuclear program. And let’s not kid ourselves here: the west and Iran have little in common after decades of hostilities – just a few urgent mutual interests and much room to exploit differences.

In the meantime, the clock is ticking on regional dangers – and the US, Russians and Iranians want to get down to business to thwart these.

Yes, an agreement over the Iranian nuclear file will help smooth the way, but the new priorities and tentative alliances have already been cast far away from Swiss conference rooms. The verdict? Iran is a necessary partner in the Middle East today. At the next round of talks in Geneva this week – deal or nor deal – that reality will define the way forward.

This article was first published by Al Akhbar English on November 20, 2013.