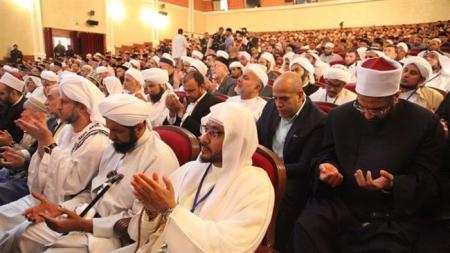 Read this article translated into Indonesian and French.

In the waning days of August, 200 or so Sunni clerics and scholars from Egypt, South Africa, India, Europe, Turkey, Jordan, Yemen, Russia and other nations quietly convened in the Chechen capital of Grozny to forge a consensus on ‘who constitutes a Sunni.’

Sunnism, the senior clerics warned, “has undergone a dangerous deformation in the wake of efforts by extremists to void its sense in order to take it over and reduce it to their perception.”

The Muslim world is currently under a siege of terror, led by a deviant strain that claims religious authority and kills in the name of Islam. So the Grozny participants had gathered, by invitation of the Chechen president, to make “a radical change in order to re-establish the true meaning of Sunnism.”

If their final communique was any indicator, the group of distinguished scholars had a very particular message for the Muslim world: Wahhabism – and its associated takfirism – are no longer welcome within the Sunni fold.

Specifically, the conference’s closing statement says this: “Ash’arites and the Maturidi are the people of Sunnism and those who belong to the Sunni community, both at the level of the doctrine and of the four schools of Sunni jurisprudence (Hanafi, Hanbali, Shafi’i, Maliki), as well as Sufis, both in terms of knowledge and moral ethics.”

In one fell swoop, Wahhabism, the official state religion of only two Muslim countries -Saudi Arabia and Qatar – was not part of the majority Muslim agenda any longer.

The backlash from the Saudis came hard and fast, honing in on the participation of Egypt’s Grand Imam Ahmed al-Tayeb of Al Azhar, the foremost center for Sunni theological study in the Islamic world.

Saudi Arabia has, after all, subsidized the flailing Egyptian economy to the tune of billions of dollars in the past few years, alongside its Wahhabi neighbor Qatar, which has in turn bank-rolled the Muslim Brotherhood – a group also excluded from the Grozny meeting. 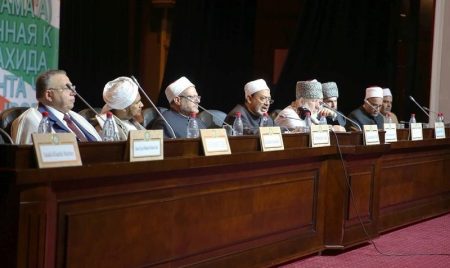 While Tayeb did not single out the Saudis in his conference speech, his elevated position in the global Sunni hierarchy lent a great deal of weight to the proceedings. And Al Azhar’s prominence in the Sunni world is rivaled only by the relatively new role of the Al Saud monarch as the custodian of the two holy sites, Mecca and Medina.

Just last year – in Mecca, no less – Tayeb slammed extremist trends during a speech on terrorism, lashing out at “corrupt interpretations” of religious texts and appealing to believers “to tackle in our schools and universities this tendency to accuse Muslims of being unbelievers.”

It is Wahhabism that is most often accused of sponsoring this trend globally.

The radical sect, borne in the 18thcentury, deviates from traditional Sunni doctrine in various ways, most notably sanctioning violence against nonbelievers – including Muslims who reject Wahhabi interpretation (takfirism).

Saudi Arabia is the single largest state contributor to tens of thousands of Wahhabi-influenced mosques, schools, clerics and Islamic publications scattered throughout the Muslim world – many of them, today, feeders for terrorist recruitment. By some accounts that figure has reached almost $100 billion in the last three decades or so.

In Grozny, conference participants made reference to this dangerous trend, and called for a “return to the schools of great knowledge” outside Saudi Arabia – in Egypt, Morocco, Tunisia and Yemen.

And Adil al-Kalbani, the imam of Riyadh’s King Khaled Bin Abdulaziz mosque, ominously cautioned: “The Chechen conference should serve as a wake-up call: the world is getting ready to burn us.”

A slow, wretched massacre of pilgrims

For the Saudis, the bad news kept on coming. On Friday, at the start of the annual 5-day Hajj pilgrimage, Lebanese daily Al Akhbar published online a shocking database from the Saudi Ministry of Health.

The leaked documents list, in painstaking detail, the names of 90,000 pilgrims from around the world who have died visiting Mecca over a 14-year period. If there was ever any question about the authority of the Saudi king as “custodian” of Islamic holy sites, this revelation should have opened those floodgates.

But even before these documents became public, calls for the Saudis to relinquish their administration of the Hajj were coming from Iran and elsewhere. Exactly one year ago, a stampede in Mina became the deadliest disaster in the history of the Hajj. Instead of tending to the dead and wounded as their utmost priority, the Saudi authorities went into lock down – concealing casualties, downplaying the death toll, blocking international efforts to investigate, forcing Hajj families to pay for the retrieval of bodies, denying wrongdoing and refusing to apologize for the disaster.

According to official Saudi government figures at the time, the total casualty toll stood at 769 dead and 934 injured. The leaked database now shows those numbers to be false. According to the Ministry of Health’s own statistics, the Mina death toll was in reality more than 10 times higher, with over 7,000 killed.

Iranians, who appeared initially to have suffered disproportionate losses – including from the collapse of a crane 12 days earlier at the Grand Mosque in Mecca where 107 died – lost around 500 citizens. Included in that number was senior foreign ministry official, Dr. Ghazanfar Roknabadi, Iran’s former ambassador to Lebanon and a key figure in regional geopolitical affairs. Saudi authorities initially denied he was even in the country and then took months to identify and repatriate his body.

But most disturbing of all was the manner in which the Saudis treated the dead and injured. Pictures that emerged from Mina in the aftermath of the disaster showed authorities shoveling up bodies in digger-like vehicles, then dumping them in piles as if they were sacks of sand. There appeared to be no care taken to even ascertain whether the victims were dead or alive. 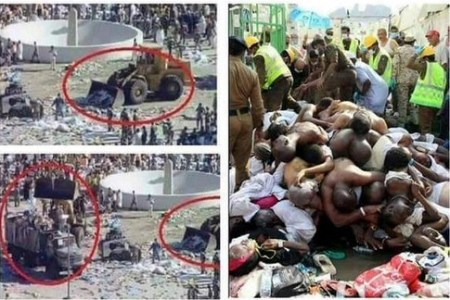 The Iranians were justifiably outraged, but the Saudis politicized that reaction and turned it into an affront to Sunni authority by a Shia authority in Tehran. The Al Akhbar stats, however, tell another story. It was mostly Sunnis who were killed in Mina – from Egypt, Pakistan, Indonesia and other countries – with victims from some states surpassing even the Iranian death toll.

One year on, Iran is not letting this issue lie. The Iranians have boycotted the Hajj this year, claiming that Saudi Arabia was unprepared to assure them of basic security requirements during lengthy negotiations between the two nations.

In his most confrontational address to the Saudi state yet, Iran’s Supreme Leader Ali Khamenei last week – during his annual Hajj message – railed against the injustice:

“The heartless and murderous Saudis locked up the injured with the dead in containers — instead of providing medical treatment and helping them or at least quenching their thirst. They murdered them…Because of these rulers’ oppressive behavior towards God’s guests, the world of Islam must fundamentally reconsider the management of the two holy places and the issue of hajj.”

And then Khamenei went to the heart of the matter: “The fitna-promoting rulers who by forming and arming wicked takfiri groups, have plunged the world of Islam into civil wars, murdering and injuring the innocent and shed blood in Yemen, Iraq, the Levant, Libya and other countries.”

In one short month, the Saudis have been challenged by Islam’s two mainstream sects – by the Sunni and by the Shia, equally – striking out at the religious authority claimed by the Saudi state and challenging the destructive, divisive, violent sectarianism of their Wahhabi faith.

As if to prove Khamenei’s point – and the Grozny consensus – Saudi Arabia’s Grand Mufti Abdulaziz Al Sheikh shot back, describing Iranian leaders as nonbelievers: “We have to understand that they are not Muslims. … Their main enemies are the followers of Sunnah (Sunnis).”

But, with that last sectarian sling, it seems the Saudis may have finally hit their limit. Within days of his statement, citing “health reasons,” the Mufti was removed from delivering the Hajj sermon he has delivered for 35 years straight.

Why stop now? It isn’t like the Saudis don’t have the appetite for a fight with the Iranians.

That fight has been playing out throughout the Middle East and beyond, in various battlefields and media outlets, to the detriment of millions.

What may have started off as Riyadh’s desire to thwart the success of a populist Islamist revolution that dethroned a neighboring king – Iran, circa 1979 – has spiraled into an existential Saudi battle to claw onto hegemony and legitimacy in every sphere.

The Saudis have long lost the ability to engage in cold, hard calculation, and have thrown themselves headfirst into ‘winning by all means.’ This has meant releasing the demons of takfirism throughout the Middle East and North Africa. Wahhabi funded and enabled jihadi foot soldiers have sprung up in Syria, Iraq, Yemen and any other place where Saudis and their fellow co-religionists/ideologues have sought out hegemonic interests.

And the lack of coherent strategy has drawn the Saudis into a number of unnecessary quagmires that have now encircled their borders (Iraq, Bahrain, Yemen), wiped out their strategic depth and emptied the state coffers.

What was meant to be a swift aerial blow to Yemeni rebels for daring to defy Saudi authority, has morphed into an entrenched, 18-month-long, money-pit of a war, with 10,000-plus deaths, war crimes accusations, proliferation of jihadist terror and enemy encroachment into Saudi territory.

Riyadh’s leading role in the destabilization of Syria and Iraq has unleashed sectarian mass murder that has gutted the Muslim world, unmasked Saudi complicity, and galvanized its adversaries into historic cooperation.

These wars have drawn in powerful benefactors like Russia and China as buffers against Saudi overreach, and has reshuffled the balance of power in the region – against Saudi interests.

All of which has chipped away at Saudi political, economic and religious clout on the international stage.

In 2010, Saudi Arabia was crossing borders peacefully as a power-broker, working with Iran, Syria, Turkey, Qatar and others to troubleshoot in regional hotspots. By 2016, it had buried two kings, shrugged off a measured approach to foreign policy, embraced takfiri madness and emptied its coffers.

The hundreds of thousands dead in the wake of this ‘Saudi madness’ are mostly Muslim and mostly Sunni. As the Muslim world wakes up to this atrocious state of affairs, like the Sunni scholars of Grozny, they will not look to censure Tehran, but to disengage from Riyadh.

And to write the final chapter on an aberrant sect called Wahhabism.

Read this article translated into Indonesian and French.

One thought on “From religion to politics, a steady isolation of Saudi Arabia”