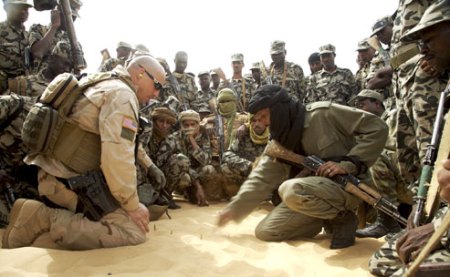 So begins the 2010 Unconventional Warfare (UW) Manual of the US Military’s Special Forces. The manual attached here (TC 18-01) is an interim publication, developed to address the definition of Unconventional Warfare and some other inconsistencies in UW Doctrine. The new UW document (ATP 3-05.1) is in the initial draft and not yet available, though sources tell me it is unlikely to differ much from TC 18-01.

But most of us have not had the pleasure of leafing through this truly revelatory blueprint that shows how America wages its dirty wars. These are the secret wars that have neither been approved by Congress, nor by the inhabitants of nations whose lives – if not bodies – are mauled by the directives on these pages.

A quote from President John F. Kennedy in 1962 opens the document. These few lines illustrate a core Washington belief that US forces have the right to destabilize, infiltrate, assassinate, subvert – all in service of questionable foreign policy objectives, with no evident consideration of a sovereign state’s preparedness or desire for change:

There is another type of warfare—new in its intensity, ancient in its origin—war by guerrillas, subversives, insurgents, assassins; war by ambush instead of by combat, by infiltration instead of aggression, seeking victory by eroding and exhausting the enemy instead of engaging him. It preys on unrest.

The Bush Doctrine paved the way for the mainstreaming of unconventional warfare by establishing the principle of pre-emptive actions against a state that may one day pose a threat to American interests. It didn’t offer any specific criteria to gauge those threats, nor did it attempt to explain why anyone outside the United States should be held accountable for US “interests” – be they commercial, security or political.

The doctrine went largely unchallenged, and has been played out with disastrous results throughout the Middle East in the past decade. The prime targets of UW have traditionally been nations and groups that oppose US primacy in the region – mainly the Resistance Axis consisting of Iran, Syria, Hezbollah and Hamas – but UW has been carried out to some degree in virtually any nation where this Axis carries some influence.

The most nefarious aspect of UW – aside from the obvious violations of international law pertaining to sovereignty, territorial integrity and loss of human life/property, etc – is the proactive and aggressive effort to psychologically sway a population against its government. It is at this entry point where UW fails every American test of “values.”

The Arab Intifadas of 2011 provided a unique opportunity – amidst regional and sometimes domestic chaos – to ramp up UW activities in “hostile” states, whether or not populations sought regime change. Prime examples are Iran, Syria and Libya – all of which have been UW targets in the past year, at different levels of infiltration and with markedly different results.

Here is a chart from the Special Forces UW manual that demonstrates the scope of activity at the early stages:

February 14 was supposed to be the kick-off in Iran, but the Islamic Republic was already on guard, having gained experience with UW subversion in the aftermath of the 2009 Iranian presidential elections.

The use of social media to coordinate protests and widely disseminate anti-regime narratives in Iran’s post-election period marked a new era in the internet revolution globally. The Pentagon lost no time in claiming cyberspace as an “operational domain” and in the past year has substantially increased its budgetary allocation to subversion activities on the web.

Last July – as I wrote in this article – the technology arm of the Department of Defense, DARPA, announced a $42 million program to enable the U.S. military to “detect, classify, measure and track the formation, development and spread of ideas and concepts (memes)” within social media.

Wired magazine calls the project the Pentagon’s “social media propaganda machine” because of its plans for “counter messaging of detected adversary influence operations.”

In order to “allow more agile use of information in support of [military] operations” and “defend” against “adverse outcomes,” the project will enable the automation of processes to “identify participants and intent, measure effects of persuasion campaigns,” and ultimately, infiltrate and redirect social media-based campaigns overseas, when deemed necessary.

The UW campaign in Iran appears to more or less have faltered at technology sabotage, social media infiltration and assassinations. Libya is at the other extreme – and the following chart gives a bird’s eye view of the UW manual’s playbook for operations of that magnitude:

The Libyan scenario of course was slightly different in that it was conducted under NATO cover, with the US military “leading from behind.” In addition, the large-scale UW operation’s success relied less on ground combat than on air cover and intelligence-sharing for attacks conducted largely by Libyan rebels.

In Syria, the UW task would have been a mix of the two. Because of the domestic popularity and strength of Syrian President Bashar al-Assad revealed here in a 2006 Wikileaks Cable, UW activities would necessarily need to start with some subversion of the population before graduating to a Libyan-style scenario.

Just as the Wikileaks cable recommends identifying “opportunities” to expose “vulnerabilities” in the Syrian regime and cause sectarian/ethnic division, discord within the military/security apparatus and economic hardship, the UW manual also instructs special forces to “exploit a hostile power’s political, military, economic, and psychological vulnerabilities.”

The Syrian demographic landscape is reflected in the UW manual: “In almost every scenario, resistance movements face a population with an active minority supporting the government and an equally small militant faction supporting the resistance movement. For the resistance to succeed, it must convince the uncommitted middle population…to accept it as a legitimate entity. A passive population is sometimes all a well-supported insurgency needs to seize political power.”

To turn the “uncommitted middle population” into supporting insurgency, UW recommends the “creation of atmosphere of wider discontent through propaganda and political and psychological efforts to discredit the government.”

As conflict escalates, so should the “intensification of propaganda; psychological preparation of the population for rebellion.”

First, there should be local and national “agitation” – the organization of boycotts, strikes, and other efforts to suggest public discontent. Then, the “infiltration of foreign organizers and advisors and foreign propaganda, material, money, weapons and equipment.”

The next level of operations would be to establish “national front organizations [i.e. the Syrian National Council] and liberation movements [i.e. the Free Syrian Army]” that would move larger segments of the population toward accepting “increased political violence and sabotage” – and encourage the mentoring of “individuals or groups that conduct acts of sabotage in urban centers.”

Now, how and why would an uncommitted – and ostensibly peaceful – majority of the population respond to the introduction of violence by opposition groups? The UW manual tells us there is an easy way to spin this one:

If retaliation [by the target government] occurs, the resistance can exploit the negative consequences to garner more sympathy and support from the population by emphasizing the sacrifices and hardship the resistance is enduring on behalf of “the people.” If retaliation is ineffective or does not occur, the resistance can use this as proof of its ability to wage effect combat against the enemy. In addition, the resistance can portray the inability or reluctance of the enemy to retaliate as a weakness, which will demoralize enemy forces and instill a belief in their eventual defeat.

And so on, and so forth.

The Bush Doctrine today has morphed under President Barack Obama into new “packaging.” Whether under the guidance of the recently-created “Atrocity Prevention Board” or trussed up as “humanitarian intervention,” the goals remain the same – destabilization of lives and nations in the service of political and economic domination, i.e., “American interests.”

When Arab governments yell “foreign conspiracy,” whether or not they are popular leaders they are surely right. There are virtually no domains left in key Arab countries – from the innocuous-sounding “civil society” filled to the brim with US-funded NGOs to the military/intelligence apparatuses of these nations to the Facebook pages of ordinary citizens – that are untouched by American “interests.”

The Ugly American just got uglier. And within these intifadas raging in the region, any Arab population that does not shut itself off from this foreign infiltration risks becoming a foot soldier in an unconventional war against themselves.

This article was first published on Al Akhbar English on May 25, 2012. Click here for Arabic version.

12 thoughts on “Going Rogue: America’s Unconventional Warfare in the Mideast”