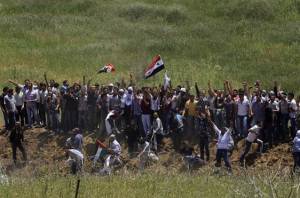 On Sunday, around 1,000 unarmed civilians marched to the ceasefire line between Syria and the Golan Heights to protest Israel’s occupation of Arab lands following the 1967 war. Hours later, in the worst bloodshed since the 1973 war between Israel and Syria, up to 23 civilians were dead and hundreds wounded after Israeli troops opened live fire on the protestors.

In the West Bank, fellow protestors were only injured, as Israeli troops used rubber bullets and tear gas to disperse crowds that were only a few feet away from them.

In Majd al Shams on the occupied Golan Heights, however, the Palestinian and Syrian demonstrators were many yards away – behind barbed wire fences – never having crossed any ceasefire line.

As was the case with the 11 unarmed protestors in Lebanon killed by Israeli forces on May 15 in Maroun al Ras. Those civilians had not crossed any border either.

Israel’s fears are understandable. The notion that Palestinians and Syrians can “just walk home” to their occupied houses and villages could destroy the deterrence barriers that Israel has worked hard to erect since 1948 and 1967. Which is why it was important for the Jewish State to teach these populations a lesson, even if it meant killing a few dozen.

All fired live rounds at unarmed civilian populations voicing their grievances and exercising their right to congregate in public.

Justifying Civilian Death
Just three weeks earlier, on May 15, Palestinian and Syrian protestors in the Golan Heights broke through the barbed wire fence, poured over the ceasefire line, met up with friends and relatives, and then went home. One particularly determined fellow – 28-year-old Hassan Hijazi who was galvanized by a Facebook group to join the protests – even decided to visit his parent’s old house in Jaffa and hitched a ride alongside some Israeli soldiers to get there. He later turned himself in to authorities and was duly escorted back to the ceasefire line by security agents.

That very recent incident contrasted sharply on Sunday with Israeli Prime Minister Netanyahu’s portrayal of the Golan demonstrators as “extremist elements” who “are trying to break through our borders and threaten our communities and our citizens.”

As the Israeli spin machine went into overdrive, we were subjected to the kinds of drivel we are by now used to hearing from regional dictators on their last legs:

The it-wasn’t-us argument: “A Syrian mine exploded, seemingly because Molotov cocktails thrown at (Israeli) forces started a bush fire which caused the explosion of the mine, a number of mines even,” an Israeli army spokeswoman said – ostensibly blaming the deaths on mines and not IDF bullets.

The deflection argument: “We believe that the Syrian regime is focusing the world’s attention on the border with Israel instead of what is happening there,” said another military spokesperson.

The extremists-are-involved argument: Oops. Netanyahu did that one himself.

Military spokesman Yoav Mordechai called the killings “a measured, focused and proper response.” The only thing that apparently needs “measuring” is his sanity – the videos of the Golan clashes clearly show protestors behind a barbed wire fence being shot at by Israeli sharpshooters. Like target practice.

Not Israel’s Border
The Golan Heights, captured by Israel in the June 1967 Six-Day War, remains occupied territory, and is recognized as such by all international legal bodies. In contravention of the Geneva Conventions, Israel immediately began to settle its civilian populations in the area, destroying more than one hundred Syrian villages and farms and handing over that land to Jewish settlers. Today, those settlers number around 20,000, equaling the 20,000 largely Syrian Druze population of the Golan, most of whom have refused Israeli citizenship. After the 1973 War, Syria and Israel agreed on a ceasefire line that has been monitored by an UN observer force since 1974.

When Israel unilaterally annexed the Golan Heights in 1981, the move was condemned internationally, and all 15 members of the UN Security Council, including the United States, agreed in UNSC Resolution 497 that “the Israeli decision to impose its laws, jurisdiction and administration in the occupied Syrian Golan Heights is null and void and without international legal effect.”

In other words, Israel has no legal jurisdiction over Golan. The Jewish state, therefore, has no “sovereign rights” in the occupied Golan.

Fast forward to statements made on Sunday in Israel. “Challenge to our sovereignty” was a theme played up by spokesmen throughout the country, beginning with Netanyahu’s announcement at his weekly cabinet meeting: “I have instructed the security forces to act with determination, with maximum restraint, but with determination to maintain our sovereignty, our borders, our communities and our citizens.”

It is hard to reconcile this suddenly sovereignty-conscious Israel with the nation that violates Lebanon’s territorial integrity every single day in illegal overflights into sovereign Lebanese airspace – sometimes up to a dozen times a day, over all parts of the country, in defiance of UN resolutions and warnings.

But on Sunday, even the US Department of State jumped on this bandwagon: “Israel, like any sovereign nation, has a right to defend itself.”

Defend itself against what exactly? Unarmed civilians who walk over a long-peaceful armistice line into territory that is legally viewed as Syrian to enjoy a cup of coffee with old friends?

There is nothing Israel fears more than this “harmless Arab.” And they would be hard-pressed to insist that there is any major threat there – Syria’s Assad family has maintained relative peace on the ceasefire line for 37 years, only to be broken by Israelis on Sunday.

Given that the Golan Heights is occupied Syrian territory; given that the international community recognizes it as such; given that Israel is in violation of Geneva Conventions and UN Security Council resolutions over its conduct in Golan; given that this Israeli government has effectively stated that it will never cede Golan – even in negotiations…what then prevents today’s angry and determined civilian protestors from righting some wrongs? Particularly when the international bodies that are supposed to protect their rights appear utterly paralyzed in implementing corrective measures and punishing the Jewish state for its violation of laws?

As the Palestinian non-violence movement grows in leaps and bounds, Israelis are faced with a real dilemma: what to do in the face of unarmed protestors who are demanding rights that are backed to the hilt by international law?

The Arab Awakening is not just about Arab dictators. It is about correcting the status quo in the broader Middle East, where Israel, too, resides. Until January 2011, shooting at civilians was a surefire way to make crowds disperse. Now, it is the worst thing a regime can do, instantly galvanizing masses to hunker down, regroup and grow bolder in their resistance. We cannot cheer people-power across the Arab World and ignore this very same resistance against a brutal Israeli regime.

Twenty-three down in Golan on Sunday. Question is, how many more hits can Israel take today.