This entry has been UPDATED – see below. 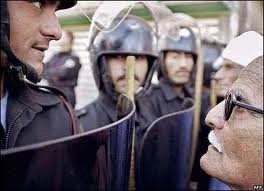 Welcome to the Pyramids. Here, to your right, lies the ancient world in all its glory and splendor. The birthplace of a civilization, the incubator of innovation, arts, sciences. And to your left lies modern Egypt and an example of the intrinsic ability of man to sabotage his successes and amount to almost nothing.

Welcome to the elections that will propel Hosni Mubarak to his sixth term as president of the Republic — if his health improves, that is. Otherwise his son Gamal is likely to be named president.

A recipient of $1.56 billion per annum in US assistance, Egypt’s population of roughly 80 million still enjoys a per capita income of less than $3,000. And three decades of aid has ensured virtually no diversification of its economy — tourism remains the country’s main industry. Welcome to those pyramids, indeed.

Egypt’s legislative elections held on Sunday were a sham from the start. A number of opposition parties are boycotting the elections in protest of the government’s machinations. The Muslim Brotherhood (Ikhwan), the largest opposition bloc and a moderate Islamist party, decided to run, although they are participating blindfolded and shackled for all intents and purposes.

Since the Ikhwan gained a hefty 88 seats in the 2005 elections — often credited to pressure inflicted by U.S. President George W. Bush for more free elections there — the government has sought to reduce their influence by implementing electoral reform in 2007, which Amnesty International called the “biggest erosion of human rights since emergency laws were introduced in 1981.”

In further electoral trickery, the government has rejected the participation of international observers, barred dozens of Ikhwan candidates from running as independents, arrested more than 1,306 members of the group and raised the number of parliamentary seats to further dilute the opposition. Human Rights Watch published a 24-page report in the weeks leading up to the election that should have Egypt’s friends at the U.S. State Department reeling.

And don’t be distracted by the oddly progressive designation of 64 seats in the 508-member “majlis” for women. This bizarre quota system that was approved for two five-year election cycles in 2009 is more likely another way for Mubarak’s ruling National Democratic Party (NDP) to assure more seats and is meant to appeal largely to secular elites. A good article here on the “pro-women” aspect of Sunday’s elections.

A Brookings Doha Center study this summer warned about upcoming elections in the Arab world — polls that, under their democratic-looking facade, have actually snuffed out largely moderate Islamist opposition parties in countries like Jordan and Egypt.

The report analyzes how “nonviolent Islamist groups in the Arab world are responding to a new, sometimes unprecedented, set of challenges” and warns that the U.S., international community, and Arab governments need to “incorporate Islamists into the democratic equation lest more radical elements fill the vacuum.” The study finds that many of the moderate Islamist groups like Jordan’s Islamic Action Front (IAF) and Egypt’s Ikhwan have more “democratic” experience than most of the governments within which they aspire to participate.

These Islamist parties are “building grassroots support, assembling cross-ideological coalitions, and oiling their electoral operations… Their reorientation away from the application of Islamic law (or Sharia) toward an aggressive reform program” presents a serious threat to the autocratic regimes in much of the Arab Mideast.

In some important respects, the objectives of the United States are, perhaps counterintuitively, more aligned with mainstream Islamists than pro-American Arab regimes. After all, US policymakers share with Islamist leaders a stated interest in gradual institutional and constitutional reform and a rhetorical commitment to democratization.

But the Brookings report also warns that “Islamist leaders often speak of an ‘American veto.’ The veto is used by the United States and other Western powers to block Islamists from gaining power, even if they win at the ballot box.” Think Hamas in the 2006 Palestinian elections. This concern may ultimately ensure that moderates refrain from participation — as they did in Jordan’s recent election — while more radical Salafist types rise to the fore — as they did in the 2008 Kuwaiti elections: “Groups that are considerably more conservative and less amenable to compromise.”

And so back to the Egyptian elections on Sunday. I will leave you now to the live-blogging capabilities of EA Worldview, a website that is following developments on the ground and is posting video footage as well as regular updates. Here are some snippets:

0845 GMT: Muslim Brotherhood MP Mohamed al-Beltagy has filed a report with the general prosecutor, accusing security forces of arming men in plainclothes to assault his supporters.

0910 GMT: Police have encircled the Tareq Ibn Ziad School in the Sahel district of Shubra, Cairo, allowing only representatives of National Democratic Party (NDP) candidates into the polling station.

1005 GMT: Ismail Askary, the independent candidate in Kafr El Dawar, has allegedly been beaten by NDP supporters and is now in hospital.

1120 GMT: Egypt’s High Elections Commission said that it has received only 10 complaints so far, the most serious involving a claim of supporters of rival National Democratic Party candidates shooting each other.

1420 GMT: MP Hamdeen Sabbahy, one of the founding members of the National Association for Change, has said he will withdraw from the election because of widespread violations.

1650 GMT: Polls will close soon. Several stations have reportedly shut early because of a shortage of ballots.

UPDATE: State Department is “Disappointed, Dismayed” at Election Reports. Tell it to Iran.

“The United States closely followed the first round of parliamentary elections held yesterday in Egypt. Egypt’s elections, this year and next, represent an important opportunity for progress. Egyptians will only have full confidence in their elections when the government is able to address existing flaws, and ensure full and transparent access by independent civil society monitors and candidate representatives to all phases of the electoral process.

Reports from domestic civil society monitors, candidate representatives, and government officials on the conduct of yesterday’s elections give us cause for concern. We are disappointed by reports in the pre-election period of disruption of campaign activities of opposition candidates and arrests of their supporters, as well as denial of access to the media for some opposition voices. We are also dismayed by reports of election-day interference and intimidation by security forces. These irregularities call into question the fairness and transparency of the process. We continue to believe that allowing international observers to monitor and freely report on elections, a normal practice in the region and around the world, is very important in building public confidence in a fair and open election.

The United States has a longstanding partnership with the government and the people of Egypt, rooted in common interests and shared aspirations for the future. We look forward to continuing to work with the Egyptian government and with Egypt’s vibrant civil society to help them achieve their political, social, and economic aspirations.”