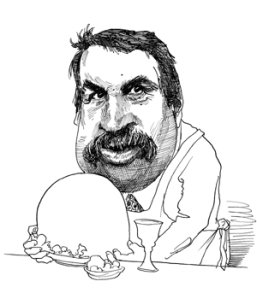 Friedman concocting his version of the world

Nothing annoys me more about New York Times columnist Thomas Friedman than his tendency to scuttle his occasionally insightful commentary with fabricated assumptions to fit his narrative.

You know that irritation that grows under your skin when somebody is making a lot of sense and then suddenly — wham — they hit you with a doozy so ridiculous you feel disproportionately deflated?

Well, that is my Friedman experience time and time again. Not always though — sometimes I am irritated from the get-go.

In his latest column on Tuesday, Friedman shines a light on a very true Middle East reality — one that quite deliberately gets downplayed in Washington’s power centers: The Mideast is now, for the first time since the Cold War ended, largely defined by two blocs of influence and their respective worldviews.

The first, is the US-led bloc consisting of Israel, Saudi Arabia, Egypt and Jordan — the latter three often ignominiously referred to as the “moderate” Arab states. The second, is the grouping sometimes referred to as the “resistance” bloc that consists of Iran, Syria, Hezbollah and Hamas.

Look, I can give him that — I don’t have a fundamental problem with the fact that he only includes one key individual from the Fatah-led Palestinian Authority to represent the entire Palestinian side. Fatah, on its own, is rather irrelevant these days, except in the minds of the US bloc. And kudos to Tom for recognizing this nuance.

Friedman then makes his main thrust, which is that only two of these actors actually have clear strategies for a Palestinian-Israeli solution: Fayyad, the former World Bank economist who, peace or no peace, wants to create a de facto Palestinian state on the ground within two years — and the resistance bloc. That’s true enough. Friedman goes on to press the other three players to forge a clear, unified strategy — preferably backing Fayyad’s plan — which can foil the agenda of the resistance bloc.

And then I did my double take. Iran… Hezbollah… Hamas… Where was Syria?

Ah, Thomas. You did that doozy-thing.

The Alliance of Syria, Iran, Hezbollah and Hamas
It is more than abundantly clear that in Washington, Tel Aviv, Riyadh and Cairo, all efforts are being made to wrest the reluctant Syria from this “resistance” bloc. It is equally obvious for those who live in the real world, that Syria has no intention of parting ways with its longtime friends.

When US President Barack Obama moved ahead with plans to reinstate an American ambassador in Damascus in 2009, the gleeful thinking in Washington was that Syria would prostrate itself in gratitude, jump at bilateral peace talks with Israel and walk into the US bloc’s fold. Increasingly, however, even US analysts are grumpily acknowledging that the chances of this now happening are akin to Sarah Palin embracing a vegetarian diet.

But not our Thomas. He decided that this is how he wanted things to be, and so — voila — it just was.

As an opinion writer, Friedman still has the responsibility to convey the facts as they are – he can always spin his analysis around them or not include them in his deliberations if he wants to produce substandard commentary. But to just unilaterally change the facts? That isn’t just wishful thinking – Friedman is trying to create the facts. And here is why his exclusion of Syria from this bloc is so completely disingenuous:

Syria Makes Its Position Clear
Renewed Syrian-US relations, rapprochement between Damascus and Riyadh, and Syria’s disengagement from Lebanon brought hopes last year that the government of Bashar Al-Assad would take a more independent regional stance. When speculation reached a fevered pitch, Assad decided to nip it in the bud by staging a photo op worth a thousand words.

Last month, he convened a high-profile meeting with Iranian President Mahmoud Ahmadinejad and Hezbollah Secretary-General Hassan Nasrallah just to underline the cohesiveness of this bloc and quash all speculation of potential rifts.

The message, according to savvy, Damascus-based political analyst, journalist and author Sami Moubayed, was two-fold. Firstly, it was a warning for Israel to abandon all thoughts of launching another war in the region — as in Gaza in 2008/9 and Lebanon in 2006: “The meeting de-escalated tension in the region and served as a deterrent by reminding all parties that the amount of destruction that would result from any war would be too much to bear.”

Secondly, the meeting represented a clear signal to the US that this alliance will stand firm and cannot be ruptured because of the will of external players. Moubayed explains:

“You don’t sever relations just because another party wants you to — you only do so when you have been wronged or there is a state of war, and those conditions don’t apply at all to Syrian-Iranian relations.”

London-based Syrian diplomat Jihad Makdissi concurs: “We have always enjoyed good relations with both Iran and the West, so why is there suddenly a necessity to break links? This Iranian-Syrian relationship is devoted to the stability and security of the region, and the West should take advantage of this friendship instead of antagonizing both countries.”

Invest, Not Divide
What does this mean? In the world of realpolitik, far, far away from Friedman’s Mideast musings, this means that the US and others can “use the leverage that Syria has within this group to moderate them,” says Moubayed.

He believes that after over a year of active engagement with Syria, the US bloc has in effect tacitly surrendered to the notion that “if they can’t break this alliance, the best possible alternative is to invest in it instead.”

There is evidence of this “investment” already: in the past two years, Syrian backdoor diplomacy has gained the release of high-profile Western captives in both Iran and Gaza. And recognition of Syria’s role has come from the highest quarters in European capitols.

As Moubayed notes, the departure of US troops in 2012 will leave a vacuum in Iraq, which Iran and Saudi Arabia will compete to fill. Secular Syria is in the enviable position of enjoying a “cross-confessional network of allies (read Shiites and Sunnis) which it can use to stablilize and normalize Iraq – to the collective benefit of Iran, Saudi Arabia and the United States.”

Even if the Syrians and Israelis struck a deal to swap the Israeli-occupied Golan Heights for peace — highly unlikely given the make-up of the current, right-wing Israeli government — Jihad Makdissi insists that nothing would fundamentally change in relation to an alliance with Iran:

“In Syria’s view, for normality to prevail in the Middle East, Israel needs to withdraw from all occupied Arab land. The occupation is the problem in the region, not Iran.”

So, Tom — peace talks or not, nuke talks or not — Syria is an active adherent of the increasingly popular regional worldview that includes Iran, Hezbollah and Hamas. All the wishful thinking in the world won’t alter a relationship that has outlasted five US presidents, and provides vital strategic value to its participants.

In all fairness, Friedman is just doing something that has been a hallmark of US policy in the Middle East for decades. Denying inconvenient facts that have left us deaf, dumb and blind to the realities we face in the region. It is no wonder we cannot claim any lasting victories.

Blind spots everywhere, and then we wonder why we fail.