“Sharmoota!” hisses the Jewish settler as she presses up against the bars of a Hebron home where she has forced a Palestinian woman to take cover. “Whore” in Arabic, the shameful word hangs in the air like verbal dynamite – and shocks again and again as rapid-fire “Sharmootas” are spat out at their victim. An Israeli soldier stands by and watches this provocation. He does nothing. Video 1, Video 2

Young teenage settlers hang around outside a Palestinian schoolhouse, waiting for the stream of Arab mothers and their children to make their way home. The settler youths – all girls – shriek abuses at the frightened Palestinian kids, kick the elders and pull headscarves off the heads of pious women – “terror games” to pass time on a Jewish holiday, all under the watch of armed Israeli soldiers who do not intervene. Video

There are 500,000 illegal Jewish settlers in occupied Palestinian territories today – a number that has increased five-fold since the US-sponsored “peace process” began 19 years ago.

Peace advocates contend that this Israeli push to “settle” Jews in the occupied territories reflects the determination of an increasingly right-wing government to prevent the establishment of a Palestinian state in the West Bank and East Jerusalem. Logic dictates that the physical presence of half a million Jews in illegal settlements and outposts – connected through a maze of Jewish-only roads – has stealthily destroyed the possibility of a land-for-peace compromise. And Israel’s government has spent $17 billion on settlements since occupation began.

But here’s something we don’t talk about readily. Why would consecutive Israeli governments heavily subsidize and incentivize the relocation of young families – women and children – into hostile environments? Why would Israel – which claims security dangers wherever there are Palestinian populations – deliberately and systematically place its Jewish civilian population in “harm’s way?”

The settlers are Israel’s human shields and live bait.

“Naatzi! Naaaatzi!” This word, amazingly enough, is a settler favorite. “Nazis!” they screech at foreign TV crews, while waving their infants around. “Nazi, Nazi, Nazi,” they chant as they provocatively try to stop Palestinians from harvesting their olive crops. And the IDF soldiers wait and watch – occasionally intervening to push a frustrated and humiliated Palestinian objector away from a taunting, threatening Jewish settler.

Eventually, a half-crazed Palestinian will fight back, even kill some settlers. Israeli authorities immediately step in and claim the “Security Risk” has increased and more Palestinian land has to be confiscated to ensure Israel’s security. More Palestinians are detained, harassed, punished. More Palestinian homes are occupied or demolished. See how that works? Unleash your craziest Jews onto a Palestinian civilian population until someone blows a fuse and hits back. Then use that as the pretext to encroach further into the lives and onto the land of Palestinians.

Jewish settlers. Half a million of them in 121 illegal settlements and 102 illegal outposts. Human shields and live bait for Israel. The Jewish state’s frontline army for depopulating Palestinian land.

International law recognizes the right of a person living under occupation to resist or retaliate against occupying forces – nobody would question a Palestinian lashing out at an Israeli soldier. But kill a Jewish settler, and the lines get blurred fast. Under the Fourth Geneva Convention, the “occupier” (Israel) may not settle its populations (Jewish settlers) in occupied areas (West Bank, Gaza, East Jerusalem), but these laws also do not permit the harming of civilians except in the case of self-defence during an act of violence. In other words, although Israel flagrantly violates the former law by incentivizing Israeli citizens to move into occupied Palestinian territory, these same international conventions do not allow Palestinians to willy-nilly defend their lives and property from Jewish settlers – except during actual hostilities, when they are usually at a considerable disadvantage.

But are settlers really “civilians” as intended by the protective language of the Fourth Geneva Convention? This is debatable on at least one score, as the language dealing with “protected persons” is often prefaced with “civilian persons who take no part in hostilities…”

“The Hilltop Youth consist of hundreds of young settler boys and girls who have become protectors of the illegal outposts pitched on Palestinian-owned land throughout the West Bank. Traumatized by Israel’s desettlement of Gaza, they have vowed to resist a similar fate, and heeding only the “law of God” and the religious-nationalist action calls from the likes of Judeo-fascist high-priestesses Daniella Weiss and Nadia Mattar, these kids have unleashed the newest waves of settler vigilantism: “Price-Tagging.”

Every time authorities act against the perceived interests of the settlers, the latter will exact a “price tag” by carrying out reprisals against nearby Palestinians and their property.

According to Israeli human rights group B’Tselem, these acts of vengeance include: “blocking roadways, so as to impede Palestinian life and commerce. The settlers also shoot solar panels on roofs of buildings, torch automobiles, shatter windowpanes and windshields, destroy crops, uproot trees, abuse merchants and owners of stalls in the market. Some of these actions are intended to force Palestinians to leave their homes and farmland, and thereby enable the settlers to gain control of them.

During the olive-picking season, when many Palestinians are at work in the orchards, settler violence increases. The violence takes the form of gunfire, which sometimes results in casualties among the Palestinian olive-pickers, destruction of trees, and theft of Palestinian crops.”

The West Bank’s “ideological” settlers have doubled in population in a decade, are rising up the ranks in the IDF, and belong to political parties that today play a pivitol role in Benjamin Netanyahu’s ruling government coalition. They are increasingly outnumbering non-ideological soldiers in the IDF’s combat units – zealots that “blow the horn of Joshua” as they enter the “battlefields” of Gaza, the West Bank, East Jerusalem and Southern Lebanon.

While some argue that it is only a few hundred Jewish settlers/youths responsible for the violence against Palestinians, these assailants are heavily protected by the larger settler community, and rarely condemned by settler organizations.

In a very recent study on settler violence, the Washington DC-based Palestine Center collated data from over 1,000 settler “attacks” between January 2009 and August 30, 2010. The data found that “settlers from two-thirds of all the settlements (religious, orthodox, secular and mixed) in the West Bank have been involved in attacks on Palestinian civilians.”

The religious settlements are by far the most violent – and here is where the data patterns get interesting: There is some clear order and logic to the actions of these violent settlers. The study points out that most attacks take place in Areas B and C in the West Bank – those areas under Israeli security control. Area B has a sizeable Palestinian population (though not as much as the densely populated centers in Area A) and Area C is where the majority of land in the West Bank lies. 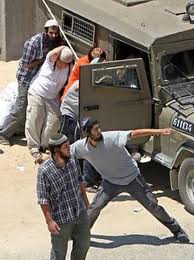 The settlers know that in these two areas – which contain 80% of West Bank land – the security jurisdiction will be on their side, which means the IDF will protect and even facilitate some of their actions. If there is land to possess and Palestinians to mow through, these are the areas in which the settlers are most likely to succeed.

Even more chilling is that whichever way you slice and dice the data, settler violence is on the rise, and is “consistent, systematic and happening in all governorates in 280 villages and locations across the West Bank.” With no repercussions for the settlers who live under the Israeli penal code in an apartheid-type system that separates them from the occupation and military laws to which Palestinians are subjected…they can get away with murder.

Take one step back and a picture emerges of an Israel intent on incorporating the West Bank and East Jerusalem into Israel “proper,” with settlers conveniently positioned in the frontline of these efforts. The Jewish state cannot today openly instigate large-scale land confiscations and depopulation of the West Bank as some of its right-wing politicians have advocated. But little by little, by invoking “security threats” resulting from Palestinian retaliation against settler attacks, Israel has made massive gains over the two decades since peace talks were launched.

The question now is whether these “human shields” merit the protection afforded innocent civilians under international law. I say no. If the Palestinians in occupied territories present a security threat so compelling that it required the building of the notorious multi-billion dollar Separation Wall – then Israel has no business moving its men, women and children right into the danger zones. You can’t have it both ways. Jewish extremists settle in the West Bank and East Jerusalem at their own risk, and should be subject to local laws and punishments alike.

Whatever they are, Israel’s settlers are most certainly not “civilian persons who take no part in hostilities.” There is nothing “innocent” about these people or the state that hides behind them, dangling their most crazy citizens as live bait to further a warped religious-nationalist agenda.